French guitar superstar, Thomas Viloteau, is one of the finest guitarists on the international scene these days. From winning the world’s most prestigious competitions to searching out the finest beers, Thomas recently sat down to share some details about his life and what he is currently up to with Six String Journal readers.

When did you start playing and why? Or, what drew you to the guitar initially?

I started playing at 12. There was a music school in the small town I lived in at the time with my parents, in southern France, and we decided it would be good for me to take music lessons. I got to choose which instrument I wanted to play, and since I already had a harmonica and saw a guy on TV play the guitar and harmonica at the same time, I thought I really needed to have a guitar. I wasn’t even really thinking about playing it at this point, just owning a guitar sounded cool to me. I had already tried learning the violin with my dad but that didn’t go well at all, I had no idea where to put the fingers. I remember when my dad told me the guitar had frets, I thought that was like cheating. To me that was just a matter of putting the finger at the right fret and plucking the string.

What repertoire do you enjoy playing the most?

The ‘classical’ guitar is a unique instrument in the sense that we have repertoire ranging from the Renaissance to modern days, but there isn’t truly enough repertoire in each style to specialize yourself in a certain style of music—it would be hard for example to say you’re a Romantic guitar specialist and spend a lifetime only playing guitar music from the 19th century without getting bored at some point. This almost forces us to play music from all eras, which can be a little surprising for audiences who are used to hearing certain players perform a certain kind of repertoire. But in the end, even if I could choose to spend my life playing only one repertoire, I’m not sure I would. I enjoy playing Bach just as much as I enjoy playing Sor or a Brazilian piece by Assad. To me, style is everything when it comes to music, and I try as hard as I can to become a totally different player from one piece to the next, which makes any repertoire fun to play.

What guitar or guitars do you perform on? Strings?

I’ve played on my Smallman since 2006 with Savarez Alliance strings on it. I’ve also acquired a Bastien Burlot guitar a few years ago which I love.

Which guitarists/musicians have had the most influence on you?

I think my teachers were mostly my source of inspiration when I was growing up. It was before Youtube, so knowledge was much more localized back then! When I moved to Paris in the early 2000s, I met a huge amount of amazing players and teachers. There are too many to cite them all, but every one I met and heard at some point has been an influence on some level.

What recording/s are you most proud of?

Hopefully the ones I haven’t done yet!

Are there any recordings that you consider have the finest recorded sound for guitar?

All the recordings made by Norbert Kraft are magnificent. When I master my own CD’s, I’ll compare them with the recording I did with him for Naxos when I won the GFA. Apart from those, ‘Nuages’ by Dyens was always a gem to me.

You seem to have a cinematographer in you, too. Would you share your set-up and process of recording casual but high quality videos for the world?

I have a couple camcorders by Canon I got a few years back. The biggest one is a xha1, which is a great 1080p camera. Technology is always moving though and with 4k now I’ll have to switch gears at some point. I record the sound with two AKG’s C414 which I love. With good placement and a good room, they sound great. I edit audio into Cubase, and video with Premiere pro.

How much do you practice? And, do you structure your practice in any particular way?

It really depends about deadlines for me. If I don’t have concerts and don’t need to learn a new piece, I’ll practice very little. I can even spend weeks without touching the guitar. If I have to learn a new program and a concert is coming up, then I’ll practice up to 6-8 hours a day, although I haven’t done that in quite a while. If I’m touring, the first few concerts require work, but after that I’ll stop practicing altogether. I’ve practiced a ton when I was younger, for many years, and I think that allows me to slow down a bit now. Of course, I can always tell I play better after I practice a lot, still!

Are there aspects of guitar that you struggle with or that you find you are still working on?

The tremolo has been a long time enemy of mine, so I’ve started practicing it, just to prove myself I could do it. It’s still not as good as some other players I see on Youtube, but I don’t think I’ll have the patience to take it much farther. To me it’s just a special technique and it should never get in front of the piece and the music. I’ll probably record a few more pieces that use it and let it go!

Do you deliberately memorize music or have a technique that helps assimilate music into memory?

I always had a good memory when it comes to music, but I also try to understand the score as much as I can. If I understand the harmony, the global shape and the details of form, the structure of the phrases etc., I usually can memorize something after a couple read-through’s.

Have you published any editions or do you plan to publish your own editions in the future?

Me and Gabriel Bianco have published a set of Scarlatti Sonatas a couple years ago. I’ve done my own version of the BWV1004 partita, too, but since I like changing things around I always find it difficult to print something and tell people this is the way I play it—because it’s mostly never true. When people ask me for the scores of my arrangements, I always advise them to work on their own transcriptions from the best possible source available for a given piece.

Do you have a favorite drill you use to warm up?

I’ll confess I don’t warm up. It takes me a bit to get the fingers going, but I’ll just play the pieces slowly if I have to warm up.

Do you have any pre-concert rituals?

I like to do a bit of stretching and breathing exercises (pranayama). I also feel better on the stage if I’ve played each piece of the program at least once the day of a concert. This is true only of the first couple concerts in a tour, if I haven’t played for more than a month. If I’m playing regularly, I can literally do anything I want pre-concert.

What single most important piece of advice about practicing would you offer to younger players?

I think there’s a thing going around that says you don’t need to practice a lot, just a couple of very focused hours can be better than six hours not focused. It’s true. Although I don’t see why we can’t play for six hours focused. The more you practice the better, that’s the short answer. As long as you fix problems of posture when they occur, to make sure you don’t hurt yourself, go and practice all day. It becomes second nature. There’s no short cut.

What repertoire do you consider essential for young/conservatory students to assimilate? Why?

Young players are developing their musical technique, and ears. On a purely musical level, there is so much to do in the Baroque repertoire or the Renaissance repertoire that it can be a little complicated for students to get into those. The 19th century repertoire is closer to our own traditions that it can feel more natural for students to play it. As far as learning technique, it’s also a very important repertoire to get into. 20th century music is also very important and will teach you the new, weird techniques. Basically I’d stay away from too many transcriptions, and stick to repertoire from the 19th and 20th centuries. When students know more about performance practices for the 16th to 18th centuries, then they should get into this repertoire. To me, playing Bach’s Chaconne when I was 18 was a great experience musically speaking, but I can’t say I learned a lot technically speaking. Sor studies are much more valuable in the regard.

Recordings that every young guitarist should be familiar with and why?

I can’t name a few that are vital to know, but I’d advise students to listen to all types of music in general, not just guitar. It’s a little limited to listen to other players when you learn a piece; you want to get to the source, and listening to other players will only give you an interpretation of what you’re seeking. It’s a bit like reading a book review; you’ll understand it much better if you read the actual book yourself. If you’re faced with a Rossiniana, go listen to some Rossini; that sounds stupid but lots of students will base their version on what they’ve heard other players do. If you’re playing some Assad, go listen to popular Brazilian music, singers, bands, not just what other classical guitarists make of this music. Get to the source.

What is the last book that you read? Favorite author/s?

I’m studying for the comprehensive exams at Eastman here in Rochester, which will be the end of my doctoral studies, so I haven’t read anything else than music theory and history related books in a while. Before that, when I had a normal life, authors I loved were Kundera, Vian, Sartre, Camus… but that was before!

Do you try to stay healthy? Exercise? Follow a particular diet? Have a favorite pre-concert food?

I try to exercise and work out as much as I can, although these past years have been quite busy with studying. A special diet of mine is going around trying all kinds of good beers whenever I can, as well as drinking lots of espresso. All very healthy.

Do you meditate in any way?

I’ll spend a little bit of time relaxing before concerts if I feel I’m a bit nervous, but I don’t do it on a regular basis.

What is your favorite way to spend time when not practicing?

I love to cook, make coffee, drink beer, watch movies, and play with my cats! 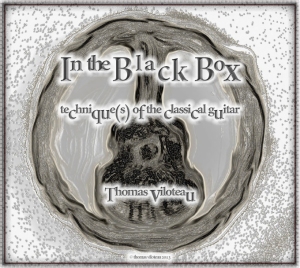 3 thoughts on “Interview with Thomas Viloteau”