The Granada School of Guitar-makers, Part 1

Why does Granada always come up when we speak of fine artisan guitars? Why have so many makers from all over the world made pilgrimages to the workshops of the Granada guitar-makers to pay their respects and to find out what we do differently here? Well known U.S., German, British, Canadian, Danish, Mexican and Belgian makers have spent time here and that doesn’t include those who learned from or were influenced by Granada makers and then went on to become great makers in their own right. There are a number of factors which contribute to this reputation for excellence and the sheer numbers of guitar-makers. The only place in the world with more guitar-makers per capita is Paracho in Mexico. Let’s go back hundreds of years and see what we can find.

Although surely there were instrument makers in Granada well before the 16th century it is only from that time that we have records and names. Alonso de Buitrago, Alonso Vega, Juan de Alcaraz and Diego de Atienza are just a few names that have been preserved. Granada may or may not have been an important centre for instrument-making back then but we do know that Rafael Vallejo built a very special guitar-psaltery for King Carlos I in 1792. Furthermore, the best-known violin-maker Spain has ever produced, José Contreras, hailed from Granada. Surely that indicates a certain level of makers from the province of Granada.  We do know from surviving instruments and their characteristics that Sevilla and Cadíz were more important centres of guitar-building and of innovation than Granada during the 18th century. It is in the 19th century that Granada comes into its own and takes over as a centre of innovation and spreads its knowledge to the rest of the country through the emigration of guitar-makers and the apprenticeship of guitar-makers from other provinces. In the opinion of Richard Bruné this rise in number and expertise has everything to do with a larger gypsy population and a correspondingly higher number of guitar-players and musical cafés in the city making higher demands on the builders. 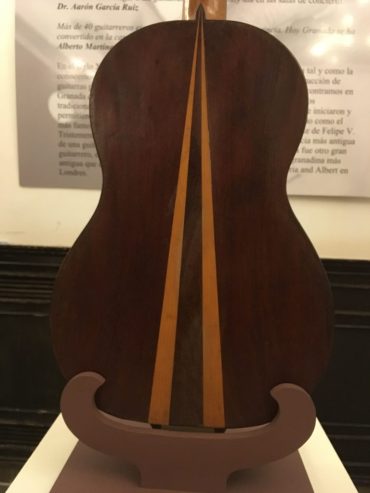 Perhaps the most important maker from 19th century Granada is Agustín Caro due to the various innovations which he is responsible for. In a single guitar from 1803 we can see two landmark changes to the guitar for the first time. This guitar has its fretboard glued on top of the soundboard whereas all preceding guitars showed a fretboard flush with the soundboard in the style of the lute. Observation of later guitars shows us that this change became consolidated over the following decades throughout the world. The other change which seems to originate with this guitar is the elimination of the double strings; this guitar was made for six single strings. Again a change which, over time, pervaded almost all guitar construction. On a later guitar by Caro, 1824, we can see the first ever example of a modern bridge with an adjustable saddle and which, like the other two innovations, became the norm. Of course these attributions to Caro will only be valid until such time as an earlier guitar by some other maker might appear showing these same characteristics.

In spite of Agustín Caro’s obvious importance the Granada maker José Pernas, also from the 19th century, might well be better known due to his association with Antonio de Torres from Almeria.  Antonio de Torres, known to all as the father of the spanish guitar, learned his craft without a doubt in Granada as reported by José Luis Romanillos through the words of Juan Manuel Sirvent “he went to Granada where he made his first guitar”. Furthermore, the writings of Domingo Prat and Emilio Pujol report that Torres learned the art of guitar-making from Pernas. If this were not enough we can go on to show that many of the innovations credited to Torres were also used by Pernas and it seems very unlikely that the student would have taught the master. In fact, a 1851 guitar by Pernas has been shown to have uncanny similarities to a Torres guitar from 1856. In his doctoral thesis Aarón García Ruiz details these common points to the extent that it is difficult to imagine that Torres’ ideas were not heavily influenced by the work of Pernas. Going back to Domingo Prat, one of  the most commonly referenced works in guitar history, he tells us that it was Pernas, not Torres who invented the tornavoz although Torres is popularily credited with it. Neither myself nor Aarón García seek to discredit Torres but rather to show that although he was a genius and incorporated many great advances in guitar-making, he did learn from those around him specifically José Pernas. Another innovation attributed to Pernas is the pear-shaped guitar as well as the wooden “hook” designed to hold the guitar on the thigh. Torres also made at least one pear-shaped guitar.

The model for a workshop today is usually a one-person affair in which the maker controls every aspect of construction and every step in the process. The presence of a possible apprentice is infrequent and in any case makes for little change in the process. Another possible model is a shop where two or three makers work together, usually family members. The latter is less and less common as time goes on but still exists. In the latter part of the 19th century this was more common and workshops were bigger with an owner-foreman who was usually the one who was ultimately responsible and whose name was on the instruments – the master. We find many surviving guitars today from the mid-19th century workshop of Juan Ortega Castellón who worked with his sons and others. His son José Ortega Ruiz was the main influence when Benito Ferrer wanted to become a builder. At approximately the same time another Ortega – Francisco Ortega Ayala – was also working in Granada. He too had sons who continued the family tradition. One of these, Rafael Ortega Ávila, moved to Madrid around 1886 and employed a young Santos Hernández before the latter moved on to serve as foreman in the workshop of Manuel Ramírez. Just one more example of how Granada shaped guitar-making in Spain as this might explain why Santos guitars were lighter and livelier than those of other Madrid makers.

A number of other makers worked in Granada and the province at this time but their influence on today’s Granada school has not been demonstrated except in general terms. Their brief biographies can be found in Eusebio Rioja’s Inventario de guitarreros granadinos. José López, Agustin del Valle, Francisco López Gascón, Antonio Llorente, Antonio del Valle, Nicolás del Valle. Bernardo Milán Suárez,

One of the most historically important of these large workshops was that of Benito Ferrer because of the dynasty that it spawned. Ferrer was a medical student from Orihuela, Alicante who gave up his studies to find work to support his extended family. Among other things he played the spanish bandurria (like a twelve-string mandolin) with the gypsy musicians. His place in history is guaranteed because in an effort to get more sound out of the instrument he substituted the gut strings for piano wire. Of course this caused his bandurria to collapse under the string tension in short order but with knowledge gleaned from José Ortega Ruiz he was able to modify and reinforce it and make it work with the new strings. This meant that other musicians came to him wanting instruments that produced as much volume as his. He took on members of the Ortega workshop and began making guitars and the different instruments in the bandurria family. Benito Ferrer is famously responsible for the first guitar played in concert by Andrés Segovia. His is the only large workshop that survived into time of the Spanish Civil War although by this time nephew and disciple Eduardo Ferrer had inherited the workshop.

Eduardo Ferrer, much like José Ramírez in Madrid, is responsible for training a large number of guitar-makers and then slowly seeing them set up shop around the city. In some cases he was supportive to the extent that he contributed financially to the new establishments. Although it was not called The Granada School of guitar-making until later there can be little doubt that he is responsible for the situation that allowed Granada to become such a hotbed for building and selling guitars by leading and training such a large community of makers. He also sold a large number of guitars made by makers who worked both within his workshop(s) and independently. Granada’s influence on the rest of the world continued with Eduardo Ferrer. In 1966, Yamaha contracted him to teach the traditional method of guitar-making and had him traveling to Japan that year as well as the two following years. After this period Yamaha sent one of its workers to Granada to continue to learn from Eduardo. Although I will argue in part two that the influence of the Granada School comes into its own under the tutelage of Antonio Marín and Manuel Bellido there is no doubt that without Eduardo Ferrer and his disciples things would have been very different. For this reason other scholars attribute the formation of the Granada School exclusively to Eduardo Ferrer.

During the “reign” of Eduardo Ferrer the other giant of Granada was the guitar and violin-maker Manuel de la Chica. De la Chica apparently spent some time with a worker from the Benito Ferrer workshop and then went on to meticulously study the guitars of Sant

os Hernández and to base his work on those to the point of making perfect copies. Two of today’s Granada makers trained with Manuel de la Chica and a few others built guitars to sell to him. Manuel de la Chica had a reputation for very careful work and a level of technical skill that we don’t find in Granada prior to his time. His guitars were very sought after in the new world at the time. A few other guitar-makers in Ferrer’s time include Isidro Garrido, Miguel Robles, Miguel López Muñoz, Manuel Martínez de Milán, Alfonso Checa Plaza, Antonio Rodríguez Orozco, and Francisco Fernández Ruiz.

The scene is now set for the next generation: Spain’s young democracy is thriving, the country is opening up to the outside world and young cabinet-makers are gravitating towards guitar-making through their interest in flamenco and popular guitar music. Perhaps most importantly the nature of the Granada guitar; that light, responsive and unsophisticated instrument is being discovered by musicians and dealers all over the world.

John Ray has been living in Granada since 1989 and has been making guitars for over 20 years. In addition to being well-known for building copies of Antonio de Torres and Santos Hernández guitars he was the editor of the book “The Granada School of Guitar-makers”. https://johnguitar.com/contact/